As long-time sailors in the adriatic Sea who love the sight of the Atlantic from the mainland, we were more than looking forward to the experience of sailing the Atlantic Ocean. And one thing can be anticipated: our expectations were exceeded. But everything from the beginning.

Our arrival in Vigo was very easy, we took the public bus to the center. Since the airport was built on one of the hills, we had the unique opportunity to drive from the top into the city and enjoy a panoramic view. The last 100m we walked to the marina. We noticed from the first sight: The Marina of Vigo is small, but fine and reminds us of many a experiences on a harbor wall of Šibenik or Makarska. Get off the boat and you are almost in the middle of the action. Laura, from Sailway, received us warmly and was more than willing to give us all the necessary information about the boat (a Elan 37), the sailing area and its attractions, our skipper and the weather for the next few days to let. She also advised us to buy our provisions in a supermarket, which is about 10 minutes walk away, but has a greater choice and supplies the food directly to the dock. A service we often missed on the Adriatic. In the evening we took another look at the nautical charts that were on board to take a closer look at our route. The area around Vigo is characterized by a fjord-like landscape with a total of 5 fingers and small offshore islands. The fjords provide protection against strong winds and allow quieter sailing at good speeds.

Next day we received our skipper and set off. Get out of the marina, set sail and head for the open sea. One thing was clear after a few miles: This area is not for inexperienced sailors and those who get slightly seasick. The sunshine was our constant companion, as well as a strong wind and corresponding waves. The open Atlantic, which we were able to enjoy in places on our route, when we sailed from fjord to fjord, has impressed us with its power and the deep blue water. You could almost say that you are very close to the elemental forces of nature when you sail through the waves with a corresponding position and 9 knots speed, past white sandy beaches, while in the distance again and again the hilly coast with its consistently green vegetation in view. 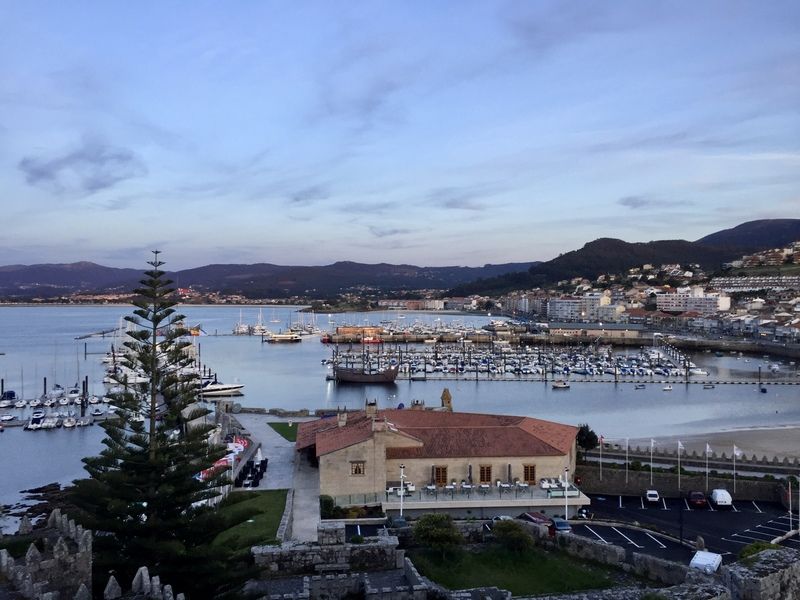 On the Atlantic coast itself and around the Cíes Islands, we experienced wonderful cities, especially Combarro. A fishing village with a great historical center, characterized by granite pillars made of stone, the so-called Hórreos. A walk through the village does not take long and is a must if you are in the area. Can be created in the associated marina.

We also made a short detour into Ibiza on the mainland – Sanxenxo. If you like long promenades with countless restaurants, cafes and shops as well as a city beach, this is the place for you. The marina definitely offers good protection against wind and weather.

Illa de Ons – the whole island is a National Park – we had to leave out, because the strong wind made it impossible to dock. A pity, we had been looking forward to the (much praised) octopus in the only inn on the island.

Not forgetting Baiona, just south of Vigo and starting point for some regattas. Right next to the marina is a Castello, which offers a wonderful sunset and a great view over the city. Speaking of town: In the narrow streets in the evening party is announced (even if it shows a different face during the day): locals and tourists can be found on the streets and you will find yourself in the middle of southern flair again. In addition, it is excellent to eat in the small fish restaurants. That’s one of our recommendations: In all places the fish is excellent. 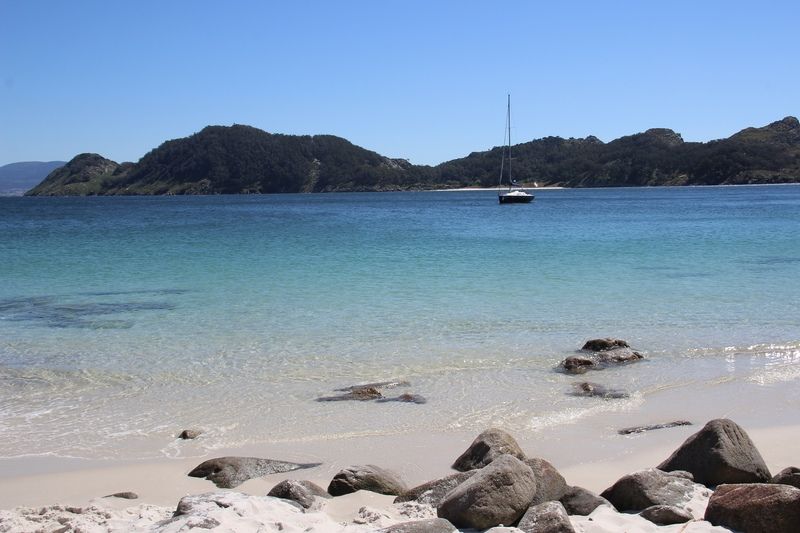 The Illas Cies are in a class of their own: selected by The Guardian magazine as one of the 10 most beautiful beaches in the world, a continuous band of the finest, floury sand in front of turquoise waters – the Playa de Rodas – links the Illa de Monteagudo and Illa do Faro.

Our skipper dropped us off at the llla do Faro and anchored a little further north, just in front of a smaller beach. This gem of the Spanish coast, of course, we had a closer look at, have risen to the lighthouse on the Illa do Faro, which gives an absolutely stunning view of the entire area and then to the northern point on the Illa de Monteagudo, where we were picked up again.

On the way there we stopped at a smaller beach with this fine, white sand and even a small trip to the sea had to be easy, despite the 16 degrees water temperature. After all, it is not so often in the European South Seas. This beach deserves its award. In the summer, however, we can well imagine how crowded the island can be, because you can get there with a tour boat and the campsite right on the island is geared to many people. The two islands are connected by an artificially created jetty, which creates at the same time a lagoon, which still supports the Caribbean flair.

With the last grains of sand between our toes, we sailed back to Vigo. One night we were allowed to spend on board the Elan 37, before we went to the airport and back to Austria.